This blog is hosted on Ideas on Europe

Air pollution and gridlocked traffic is part of the daily life for many people living or working in major cities around the world. Unsurprisingly, cities around the world have increasingly taken drastic measures to reduce both pollution and traffic. Many of these climate initiatives are miles ahead of national governments. The latest initiatives by four major cities (Paris, Mexico City, Madrid and Athens) is to ban diesel vehicles by 2025[i]. Similar to the ban on diesel cars mentioned in my previous blog post[ii], the aim of this initiative is to push people to drive electrical cars or to bike round the cities.

Air pollution, noise and gridlocked traffic is daily life for many commuters around the world. Indeed the Guardian Newspaper[iii] recently published a series on the huge traffic problems in Jakarta, where traffic is gridlocked most of the day due to lack of public transport and increasing living standards leading to more car owners, which have increased air pollution. Several major European cities have already introduced measures to reduce traffic, such as congestion charges in London and Stockholm and investment in cycle paths have made Copenhagen and Amsterdam famous. These initiatives all aim to change mobility patterns within the cities.

Air pollution continue to be a major issue for many cities and the latest European Environmental Agency (EEA) report on air quality[iv] states that “emissions of nitrogen oxides (NOX) from road transport have not decreased sufficiently to meet air-quality standards in many urban areas.” According to the EEA, one of the reasons is due to diesel road vehicles polluting more than allowed (see figure below).  This impact public health especially in urban areas and city centres, where levels of NOx are higher than permitted by the EU Directive on air quality[v] and recommended daily limits by WHO. On a positive note, other pollutants from road transport have decreased (ibid). Thus progress is being made, but more is needed. 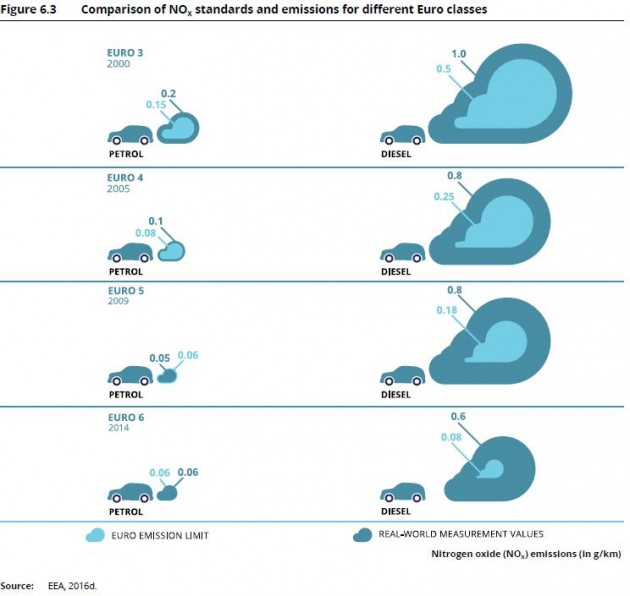 Leading climate cites have imposed stricter limits to road traffic than national governments and thus have achieved more than many national governments. Yet, Copenhagen[vi], which is often mentioned as a leader in sustainable transport, struggles with high levels of pollutions in certain areas in the city centre due to road traffic, which only demonstrates that cities on their own cannot tackle the problem of air pollution caused by road transport. Moreover, the initiatives taken by cities to change traffic behavior within their jurisdiction do not solve the general problem of increased traffic and its subsequent negative impact on the environment in other areas, instead some of the traffic problems have moved to the surrounding suburbs and commuter towns. As I have discussed in previous reflections in this blog, the negative environmental impact of increased traffic can only be solved through coordination between different levels of governance from the local through to international levels and by imposing stricter regulations on emissions from road vehicles to promote alternative fuels. Here the idea posed by the Swedish minister for climate Isabella Lövin to ban fossil fuel cars at EU level from 2030 is a good place to start addressing the problem with road transport pollution[vii].

Finally, cities are increasingly playing an important role in leading the way towards a new mobility paradigm and they can put pressure on governments to change national infrastructure and transport policies. Cities are actively participating in COP meetings and have set up various networks to share experiences and promote best practices. Together with Isabella Lövin’s idea to end sales of fossil fuel cars by 2030 on a European scale cites can put pressure on industry to create better and cleaner technologies to replace fossil fuel vehicles thereby simultaneously protecting free movements and the environment.

EU on what track?

This blog reflects my main research interests in climate policy, sustainable mobility and renewable energies, both at EU and national level, especially how the political decision-making processes affect the policy outcome. Moreover, I'm also commenting on different aspects of teaching and learning.

UACES and Ideas on Europe do not take responsibility for opinions expressed in articles on blogs hosted on Ideas on Europe. All opinions are those of the contributing authors.