EU on what track?

About EU on what track?

This blog reflects my main research interests in climate policy, sustainable mobility and renewable energies, both at EU and national level, especially how the political decision-making processes affect the policy outcome. Moreover, I'm also commenting on different aspects of teaching and learning.

Problem-oriented project learning is integral to Roskilde University pedagogical philosophy, which requires students to become researchers already from their first day at the university. Every semester, the students have to come up a new research idea and find fellow students to work with to carry out a project. The project is worth half their ETCS points and it is the only grade, they get in their first year of study. Thus, it is imperative for students to not only find an interesting topic, but also students they can work with.

The semester starts with project group formation, a 3-day process, which begins with brainstorming research ideas and ends with formation of research groups working on specific topics. The aim of the process is to facilitate an inclusive space where all students can exchange ideas and discuss potential research topics. However, the process can be a brutal example of social exclusion and alienation, where weaker students struggle to find groups. Thus, it is crucial to make sure the process is open and inclusive. All research ideas are written on a whiteboard and posters, enabling everyone, including the lecturers, to see which ideas are active (see photo at the end of the text). Moreover, groups are open for new students to join until 1 hour before the deadline.

This semester, a colleague and I facilitated the project group formation for second semester students studying international social sciences. The first day is all about generating ideas, which the students explore in more detail on the second day and the final day is about agreeing on a research topic.

The first day, I introduced the requirements for the project. Afterwards, lecturers presented their research interests, which aimed to inform the students of the supervision topics available. Then students volunteered to give ‘fire-speeches’, i.e. promote their research ideas and convince other to join them. My colleague wrote the research ideas on posters, which we placed across the room, so students interested in an idea could, write their brainstorming down and, if they left, new students could follow the discussion. At the end of the first day, the students had to pick two themes this reduced the number of themes.

During the final day, the students developed research topics and wrote short statements, which enabled me to allocate appropriate supervisor to the projects. A few students, who had not been present the previous days, were able to join existing discussions. There were several big groups, which had to find a way of separating into smaller groups (the maximum numbers of students in a group is six). My colleague and I helped these groups to find different perspectives on the same research topic, which enabled them to separate into smaller project groups.

Overall, the 111 students have formed 22 project groups with 2 till 6 students in each group. It is now time for the students to formulate their research design, agree on how to collaborate, and make an appointment to see their new supervisor.  Thus, the group work has only just started.

Over the coming semester, I will discuss some of the benefits and challenges of problem-oriented project work, including giving and receiving peer feedback, workshops focusing on how the students can manage their project and group work, and the role of the supervisor. 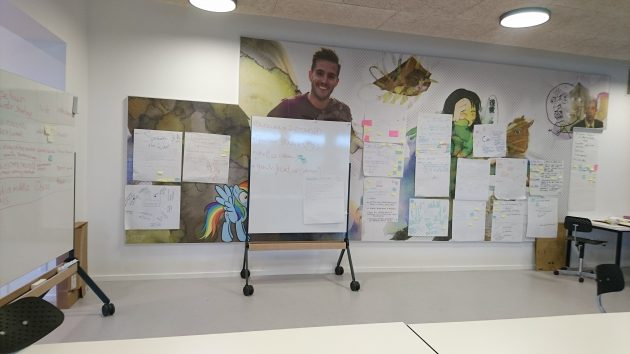 Student projects: giving & receiving feedback | Group formation: from research ideas to project groups | A jam-packed study tour to Brussels & students asking challenging questions to policy-makers | When art asks questions we can use to teach politics | When researchers reach out and engage with the public in a dialogue |

UACES, IACES and Ideas on Europe do not take responsibility for opinions expressed in articles on blogs hosted on Ideas on Europe. All opinions are those of the contributing authors. The content is licensed under a Creative Commons Attribution - NonCommercial - ShareAlike 4.0 International License.

The map in the Ideas on Europe logo is an abstract map. It does not imply the expression of any opinion whatsoever on the part of UACES, IACES and Ideas on Europe concerning the legal status of any country, territory, city or area or of its authorities, or concerning the delimitation of its frontiers or boundaries.